This analysis is by Bloomberg Intelligence senior analysts Will Hares and Eric Kane. It appeared first on the Bloomberg Terminal.

BP’s ESG performance and outlook are bolstered by an ambitious net-zero emissions target from its operated upstream production by 2050, complemented by a tenfold surge in green spending, 50 gigawatts of renewable-power generation by 2030 and a 40% decline in oil and gas volume. Ecological metrics are favorable, with significant improvement in the 10 years since the Deepwater Horizon disaster, as BP’s safety and spill records are in-line with or above peer averages. BP’s board is among the most gender-diverse, and it has an investor-friendly governance structure and best-in-class ESG disclosures.

BP’s ESG scores reflect mixed performance on key issues
Total carbon embedded in reserves and an increase in fatality rates result in BP trailing peers on climate exposure and occupational health and safety, two of the most impactful environmental and social issues, in our view. Average scoring on management of greenhouse gas emissions reflects incomplete disclosure. BP continues to show uneven performance on key aspects of board composition.

Embedded carbon in reserves weighs heavily
BP and its integrated oil and gas peers face a range of significant environmental, social and governance issues. Those related to climate change and occupational health and safety are the most important, in our view. BP’s performance on climate exposure is negatively affected by higher-than-average embedded carbon in total reserves and a lack of direct disclosure on total investment in renewable energy. The company performs well on key metrics of greenhouse gas emissions, including gas flaring, but doesn’t disclose information on fugitive or process emissions. The company’s overall occupational health and safety score decreased from 2018 to 2019, due to a higher fatality rate. BP achieved leading scores on board independence but showed mixed results on other key board-composition metrics. 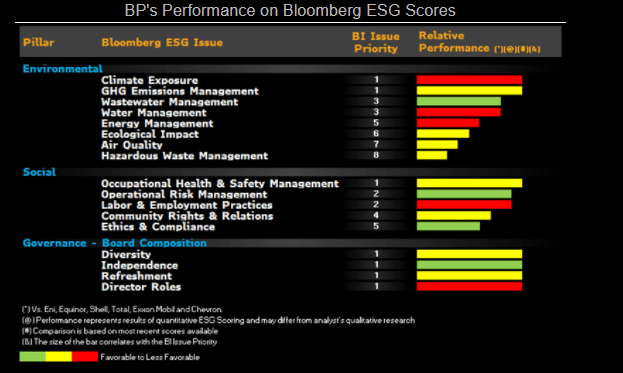 Profile
how can we help you?